Selecting the right rope - Why should you be looking at LDBF?

In the history of ship mooring, diameter has often been the only criterium in the selection of ropes. Today, it is still commonly used to compare mooring ropes, with common advice being that thicker ropes should be chosen for heavier vessels. The article examines how the measured diameter may differ from the value listed in product descriptions and why you should be looking at Line Design Break Force (LDBF).

The new era of safer mooring

Click here for more information on our total mooring solutions, including products and service offerings.

The fundamental function of a mooring rope is to secure a vessel to a permanent structure and to withstand the forces coming from swell, tide, or wind that are applied to the vessel. Choosing an appropriate set of ropes that has enough strength to withstand those forces is critical for the safety of the crew during mooring operations and compliance with international regulations.

In the history of ship mooring, diameter has often been the only criterium in the selection of ropes. Today, it is still commonly used to compare mooring ropes, with common advice being that thicker ropes should be chosen for heavier vessels.

However, there is often a difference between the nominal diameter of a rope (an approximate value listed in product descriptions) and its actual measured diameter. In addition, two ropes with the same nominal diameter may be of different strength. This can be confusing for the person in charge of buying mooring ropes for a vessel and may lead to the wrong rope being selected.

To avoid confusion and simplify the rope selection process, the Oil Companies International Marine Forum (OCIMF) is now recommending the Line Design Break Force (LDBF), rather than diameter, as the deciding factor. LDBF is the minimum strength at which a new, dry, spliced mooring rope will break, when tested according to the test procedure specified in OCIMF MEG4.

Let’s examine why a mooring rope’s measured diameter can differ from that in its product description, and how the LDBF is a more reliable criterium in determining the right set of mooring ropes for each vessel.

The difference between nominal and actual diameter

The nominal diameter is a reference number used to designate a rope that corresponds to its approximate diameter (ISO 10325) and is the value often used in product descriptions.

The actual diameter is a measurement of the circle circumscribed around the cross section of the rope, usually under a given tension and method (ISO 1968). This measurement can differ from the nominal diameter, under various conditions.

While two different ropes may have the same nominal diameter, they may not be able to withstand the same amount of force before breaking. As such, the nominal diameter of a rope is a less reliable gauge than its LDBF in determining if it will be strong enough for mooring operations.

Elements influencing the measurement of the diameter of a rope

There are various factors that can influence a rope’s measured diameter.

Differences in construction, design, material, or coating will lead to different results at a given tension. Likewise, differences in tension (load) will also influence a rope’s measured diameter. 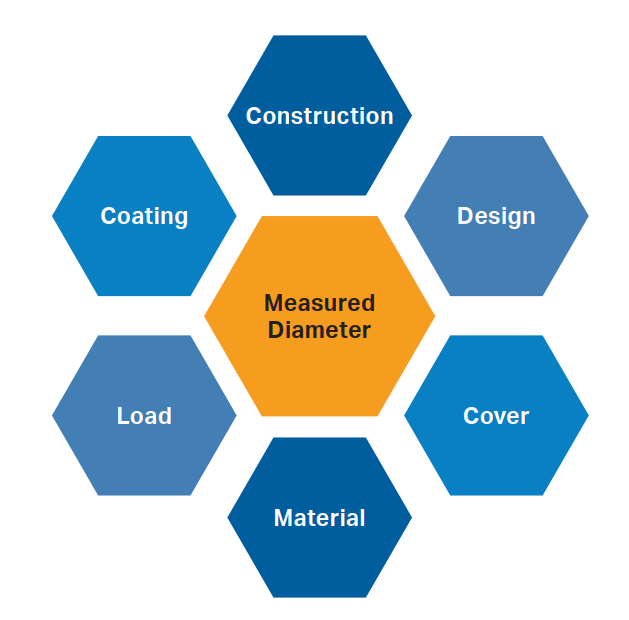 Variations due to design & construction

Due to their outer shape, 8-strand ropes will have a bigger variance in diameter measurements compared to 12-strand ropes. As shown in Figure 1, an 8-strand rope will have a minimum and a maximum diameter, depending on which part of the rope is measured. Therefore, the location of the measurement of the diameter will impact its value.

Laid ropes and 12-strand ropes will not exhibit the same variation in diameter (Figure 2) as they have smoother outer shapes.

Additionally, a rope with a cover will typically have a larger diameter than the nominal value. This variation is dependent on the material and the type of cover. The breaking load of the rope is typically linked to the core rope and its nominal diameter, while the cover provides an additional layer of protection which increases the diameter of the rope.

Ropes with Snap Back Arrestor feature
For 12-strand ropes using a SnapBack Arrestor (SBA) element, the diameter measured under tension can be slightly larger than that of the same rope without an SBA element. This is due to the SBA filling part of the “void” at the core of the 12-strand rope. 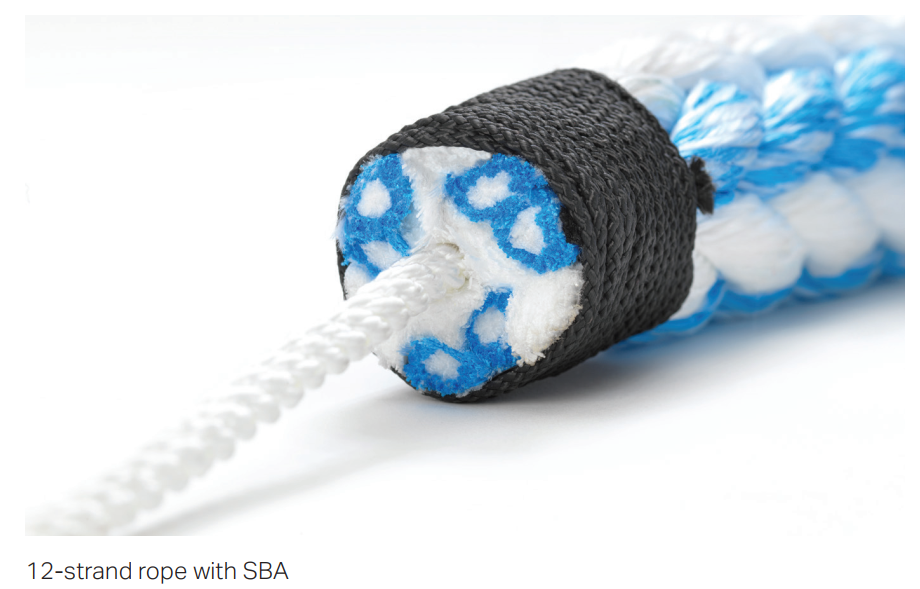 The figure below shows the differences in measured diameter of four different ropes, each having a nominal diameter of 46mm.

Although all ropes have a nominal diameter of 46mm, the actual measurements vary by up to 24%, from 42mm to 57mm.

This clearly shows that the actual diameter of a rope can be very different from its nominal diameter.

Evolution of diameter with tension

The higher the tension applied, the smaller the measured diameter of the rope will be.

The graph below shows the evolution of the diameter of a 12-strand Acera rope when a tension load is applied. The rope used in this example has a nominal diameter of 34mm.

These results show once again that the nominal diameter is not always representative of the actual diameter of the rope, and therefore is not recommended to be used as the main parameter when selecting a rope. 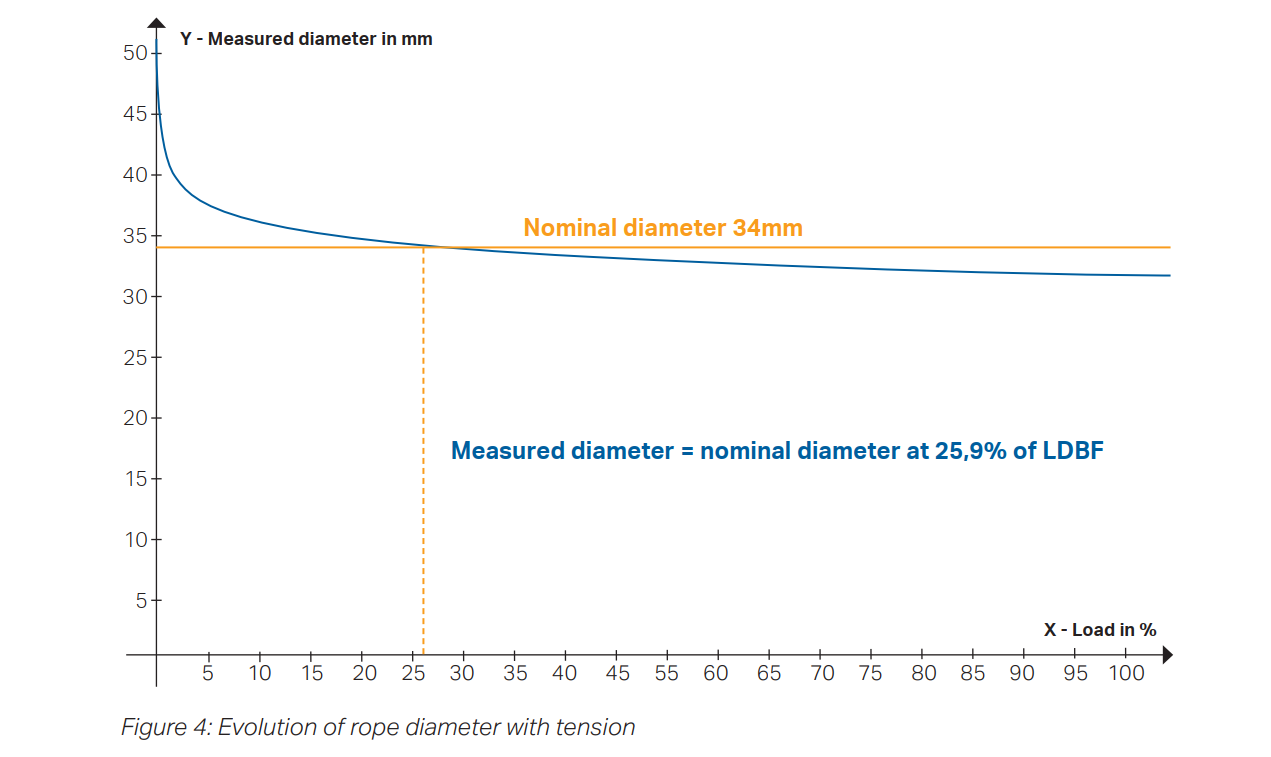 During the initial uses of a new rope, tension will cause compacting of the rope structure. This is a normal process that occurs with all fiber ropes. Due to compacting, the diameter of the rope (unloaded) will decrease slightly.

The strength required for a mooring rope to withstand forces is dependent on the weight and size of the ship as well as the weather conditions it will encounter during mooring operations.

The strength required by a ship’s mooring system is also known as the Ship Design Minimum Breaking Load (Ship Design MBL) (OCIMF). This is the core parameter against which the mooring ropes should be dimensioned.

When selecting a mooring rope for a specific vessel, the LDBF of the rope must be equal to or greater than the Ship Design MBL to ensure that the rope is strong enough for mooring the vessel safely.

Using LDBF, there is a lower risk of choosing ropes that can be unsuitable for the application and of these ropes being rejected by vetting inspectors.

Furthermore, many rope manufacturers have been granted type approval for their products. When a Type Approval Certificate is issued for a rope, it means that the LDBF has been verified by a classification society, hence making this
characteristic more reliable.

The nominal diameter of a rope is rarely equal to its measured diameter and should only be considered as a reference value. Two ropes of the same nominal diameter can have very different LDBFs and linear densities. The measurement of the actual diameter is also dependent on various factors, and as such, not reliable when comparing ropes from different suppliers.

Rather than diameter, selecting a rope with the correct LDBF ensures it is suitable for the Ship Design MBL of the vessel. This also translates to compliance with relevant guidelines and regulations such as OCIMF MEG4, reduced risks for the crew, as well as a lower chance of damage to the equipment during mooring.

Using a rope selector that factors in LDBF can help streamline the process of deciding on the right set of mooring ropes for each vessel.

Wilhelmsen has developed a tool in our Product Catalogue that allows customers to easily filter ropes by their strength (LDBF) and select a set that is fit for purpose. 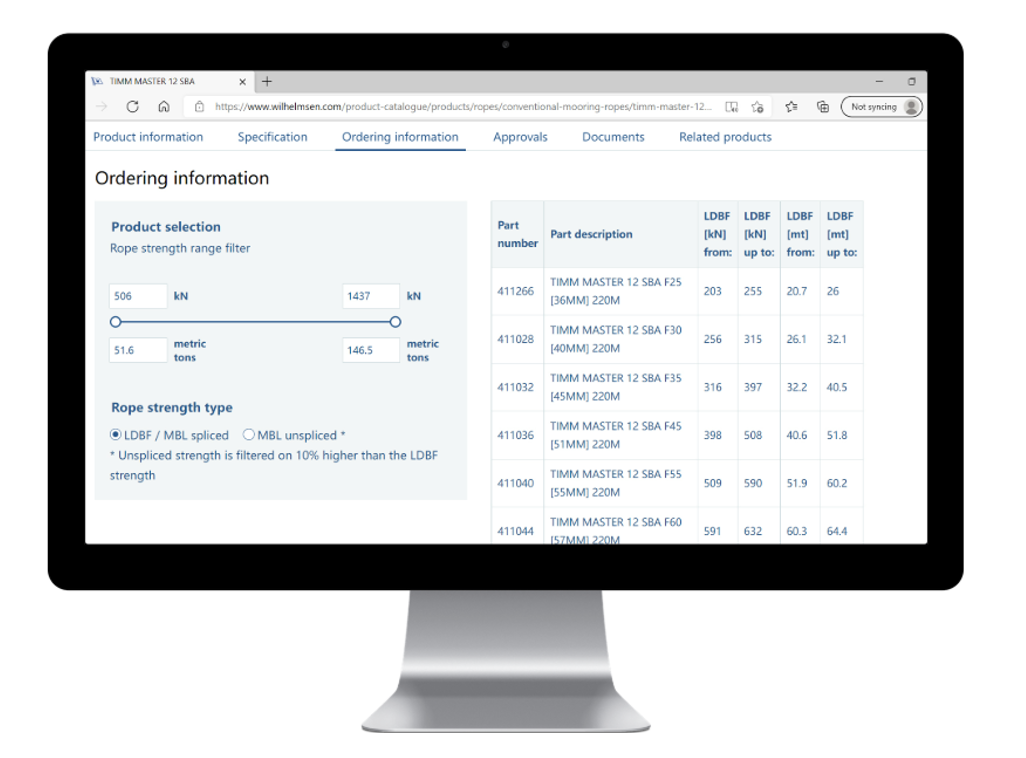 Visit this page for more information on our total mooring solutions.