With new testing for the entire mooring system, Wilhelmsen Ships Service recommends replacing ringtails with single tails. This article aims to give you relevant information on the attributes of ringtails and single tails, and their performances on new tension tests designed for whole mooring systems.
Updated 22. Oct 2018

What is a stretcher?

In a mooring arrangement where the main line is steel wire rope or HMPE rope with a minimal elongation, a stretcher has the function of taking up the loads caused by the environment, increasing elasticity and “stretch”. Without a stretcher, main lines made of steel or HMPE would not be able to absorb the peak loads and could break.

Terms such as mooring tail, ringtail, grommet, pendant, forerunner, etc. are also used to describe this part of the mooring solution for a vessel. 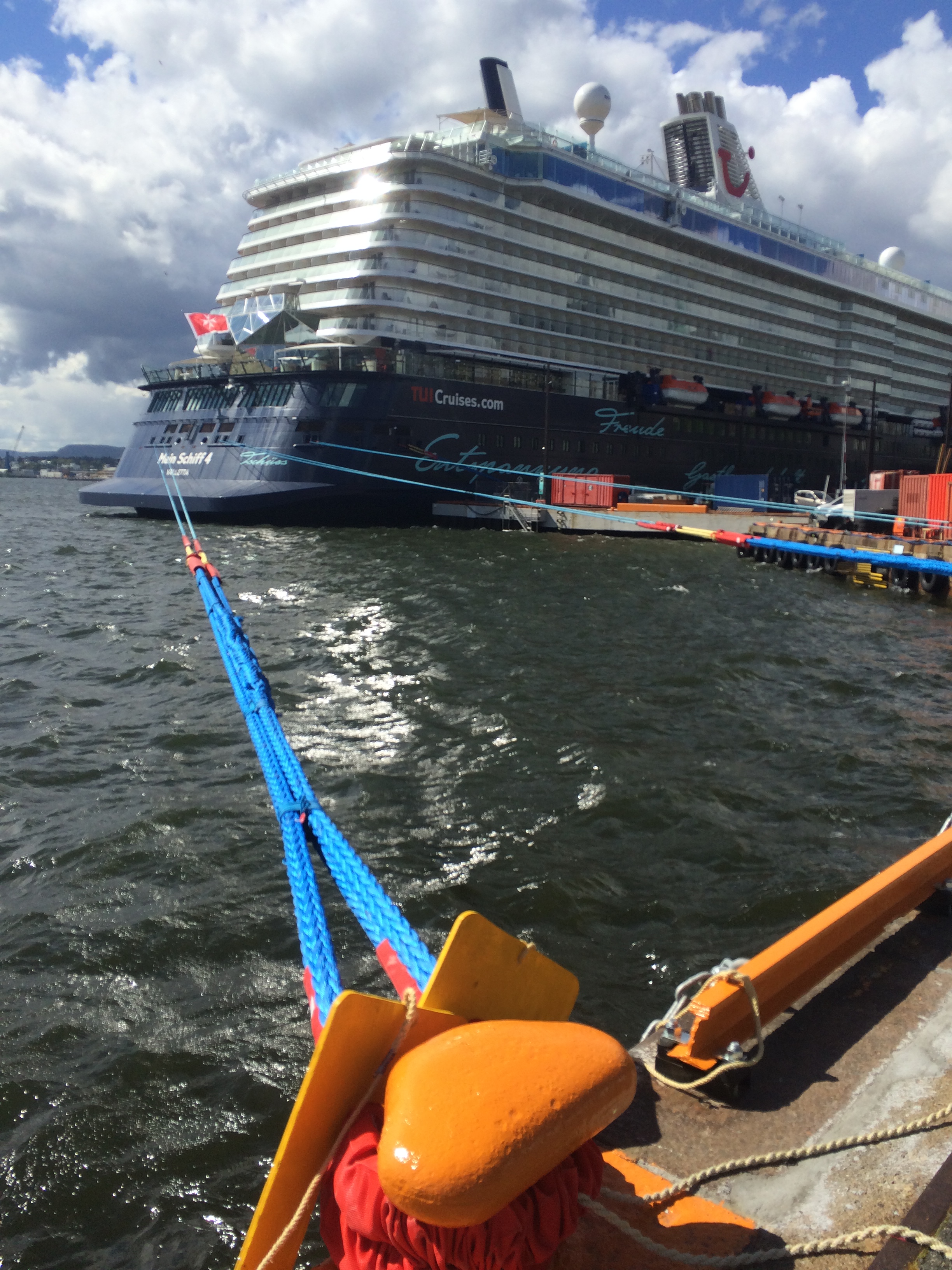 A stretcher (blue rope connected to bollard) is a shorter, up to 22 metres line or ring that is connected to a typical 220 metres main line (blue rope with yellow and red protection), increasing elasticity.

Stretchers can be produced from diﬀerent materials based on the environment they will be used in. In most cases, we recommend using mixed composition ropes, such as the Timm Master. For exposed terminals where higher elongation is needed, polyamide, Timm Flex, could be recommended.

The length of the stretcher will depend on the expected elongation that the stretcher needs to add to the solution. It is important to realize that a longer tail stores more energy and can cause a more dangerous snap back if it breaks. Tails should not be in contact with roller fairleads during operation. The usual length of a stretcher is 11 metres, but in some cases, longer lengths of up to 22 metres can be needed.

What are some common stretcher designs?

Until today, two designs of the stretcher have been widely used: Single tail and Ringtail.

Single tail is a short synthetic rope with eyes spliced in both ends.

Ringtail is created as an endless loop with one splice, normally with seizing for safer usage.

Manufacturers of ringtails normally use the coefficient of 1,6 to calculate the strength of the ringtail against the single tail. This strength, and even higher, can be achieved when testing the ringtail separately (pin-pin method).

The coefficients of tail/ringtail strength realisation according to the unspliced strength of the rope: 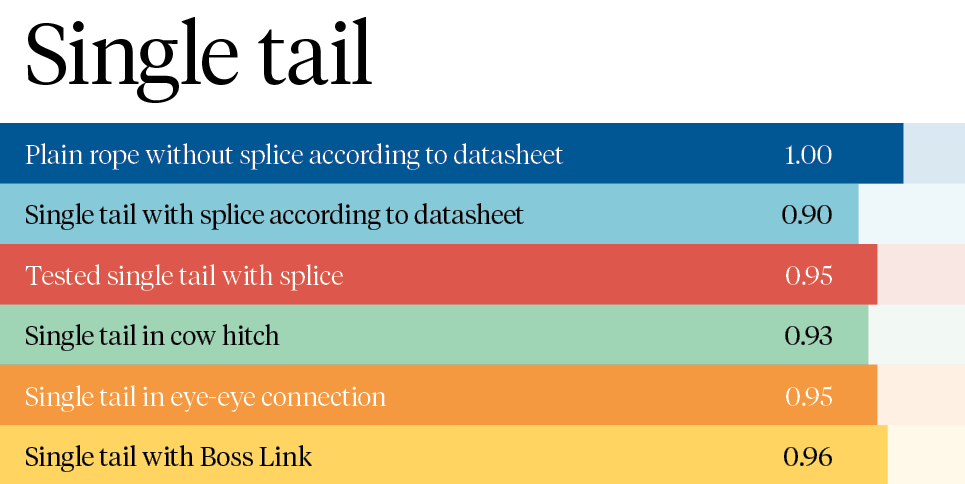 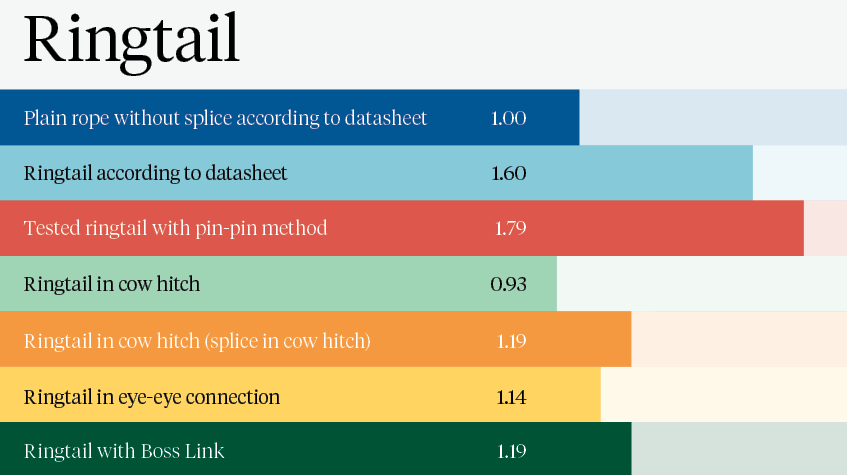 From these tests, it’s clear that even the ringtail itself has a coefficient of 1,6 according to the data sheet, and tested even 1,79, it falls to 0,93 – 1,19 after being placed in a connection. A common connection method with HMPE ropes is the cow hitch, which, as shown from the test results, is the weakest solution among all methods tested. Other connection methods like eye-eye connection, or mooring shackle, or Boss Link, also do not increase strength to such a level that the ringtail would be eﬀective enough.

Connections used in the test

Our findings show that the strength of a ringtail in a cow hitch is equal to the strength of a single tail. These results are caused by the geometry of the connection and the low D/d ratio and are common for all manufacturers.

Roscislaw Solowiej, Technical Product Manager, explains this situation:
“Geometry of the connection (cow hitch or otherwise) is the same for single tail and ringtail. There is no reason that a cow hitch in a ringtail should be much stronger than in a single tail. The connection is always the weakest point in the system.” 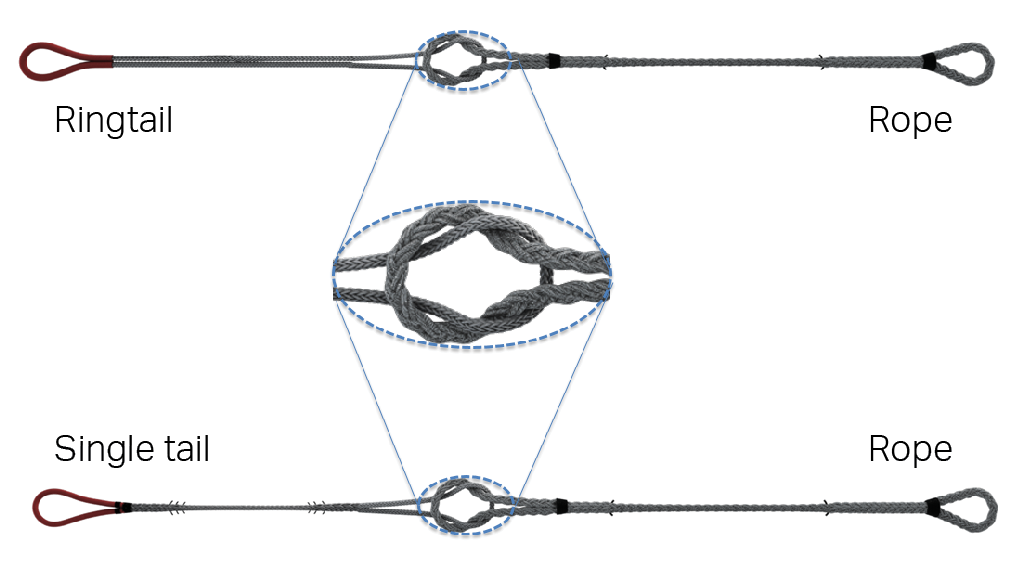 Geometry of the connection (cow hitch or otherwise) is the same for single tail and ringtail.

“This discovery was made due to the new test bench we installed in our factory in Slovakia that allowed testing of stretchers in connection. Our new test bench, with a length of nearly 30 metres, load of up to 300 tons and with a 4 metres piston, allows us to test not only separate components of mooring, but the entire mooring system, which meets one of the new standards established that requires a system test. Prior to the new requirement, there was only a need to test components.”

With new testing for the entire mooring system, Wilhelmsen Ships Service thus recommends replacing ringtails with single tails. This can be done by regular replacements and the strength of the single tails should be equal to the ringtail previously used. According to the OCIMF MEG4, the strength of the stretcher (Tail Design Break Force – TDBF) should be 125%-130% of the ship design MBL, TDBF is tested in wet condition.

There will still be situations when a ringtail is needed. This is especially when the diameter of the single tail is larger than can be fitted into the mooring shackle, Boss Link. In this case, the ringtail should be tested in the intended final solution.