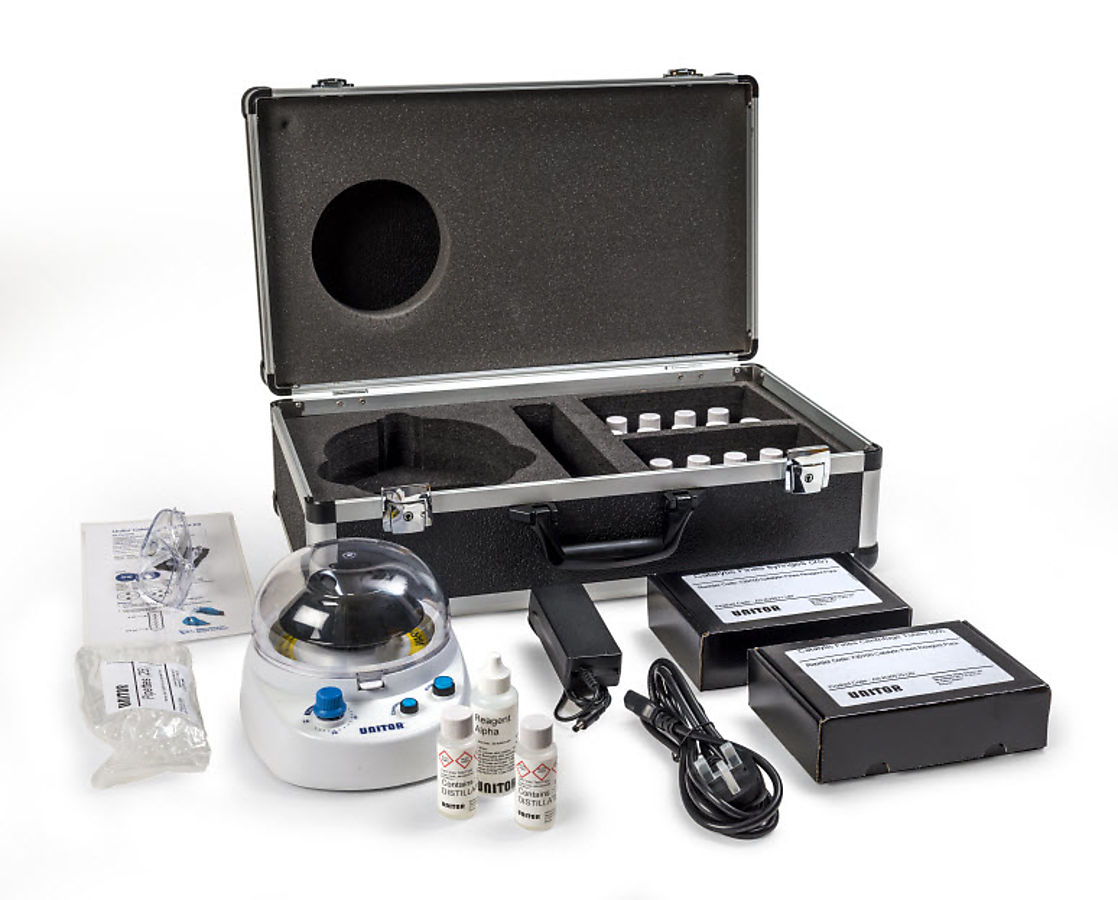 Testing with Unitor Catalytic Fines Test Kit protects your engine from unwanted catalytic fines wear from VLSFO introduced through IMO 2020. An easy to use test kit used to measure the catalytic fines in fuel oil. The test kit will flag fuel samples with dangerous levels of catalytic fines.

Much of the heavy fuel oil (HFO), burnt in the cylinders of large 2-stroke marine diesel engines, is contaminated with hard particles known as catalytic (cat) fines. These particles, which find their way into the fuel at the oil refinery, can cause catastrophic abrasive damage to engine cylinder liners during the combustion process. This problem has been inadvertently exacerbated by recent changes to the regulation of marine air pollution because it has driven the use of cat-fine prone, low-sulphur fuel oils. As a means of self-preservation, vessels collect representative fuel samples during bunkering and then send them off for laboratory analysis. However, the test results often only become available once a ship has set sail and is far out to sea, by which time significant engine damage may already be in progress.

The Unitor Catalytic Fines Test has been designed to flag up HFO samples that may be contaminated with dangerous levels of cat fines before the fuel has even been pumped aboard. The test is simple to perform, cost effective, and can be completed within a few minutes. The test kit can determine cat fines down to 20 ppm but experimental results demonstrate that the test is capable of identifying those fuel samples that have a cat fine concentration of > 60 ppm (Al + Si), and which therefore exceed the limit recommended by ISO 8217:2012. In fact the test has been specifically designed to provide the crew with a clear sail or don't sail indication with regards to fuel quality.

The rate of settling is determined by Stokes' Law, which takes account of the particle size, difference in density of the catalyst fine and the fuel, and the viscosity of the fuel. Various values are quoted for the density of catalyst fines, but in reality they may be likened to honeycombed structures, which retard the rate of separation. This is further hindered by the outer shell of water by virtue of the close proximity of the density of water to that of the fuel.

The extent of the removal also depends on the height of the tank (fixed) and the size of the particles (variable). As far as the centrifuge is concerned, the critical factor is the relationship between the actual viscosity of the fuel and that for which the centrifuge was sized. If there is a difference in viscosity, the residence time of the fuel in the centrifuge will be greater than the design value; hence directionally the centrifuge should be able to remove fines of a smaller size. Whilst this approach is theoretically correct, the operational result is totally dependent on the size distribution of the fines.

With the introduction of modern centrifuges without gravity discs the recommendation is now to operate all available in parallel, which enables the flow through each to be reduced to the minimum practical level. The fuel is afforded the longest residence time in the centrifuges and the highest separation efficiency can be achieved. Combined output should be equal to the consumption. The temptation of using a higher rate so the daily service tank overflows back to the settling tank and is re-circulated should be avoided.

Is frequently bought together with

This page is printed from: