One of the most common reasons why a sewage treatment plant malfunctions is that the wrong chemicals are used. We have the right solution to give your vessel the complete probiotic protection.

Sewage on board, ‘Blackwater’, refers to drainage from toilets, urinals, medical premises, spaces containing living animals and any other wastewater mixed with such drainages.

As per Marpol Annex IV, there are strict regulations regarding the discharge of such sewage from ships. Most of the vessels are required to be equipped with a sewage treatment plant which ensures that the sewage is treated before it is discharged into the sea. The most common type of sewage treatment plant is the biological one which relies on bacteria to decompose the sewage.

Along with ensuring that the sewage treatment plant is in its optimal working condition, the crew also needs to deal with challenges such as:

If these challenges are not tackled, a whole deck of passenger or crew cabins could be blocked off which would cause serious inconvenience to everyone onboard. Therefore, it is vital to ensure that the vessel’s sewage treatment plant is kept in its optimal working condition to minimize further challenges that could arise.

One of the most common reasons why a sewage treatment plant malfunctions is that the wrong chemicals are used to deal with the above challenges. Due to a lack of training, the crew resorts to using toxic chemicals which do more harm than good because:
• The chemicals kill the bacteria needed to decompose the organic waste in the sewage treatment plant
• Harsh chemicals can be corrosive in nature and over time, they damage the structure of the pipework, leadingto leaks and holes
• In severe cases, the piping system completely breaks down 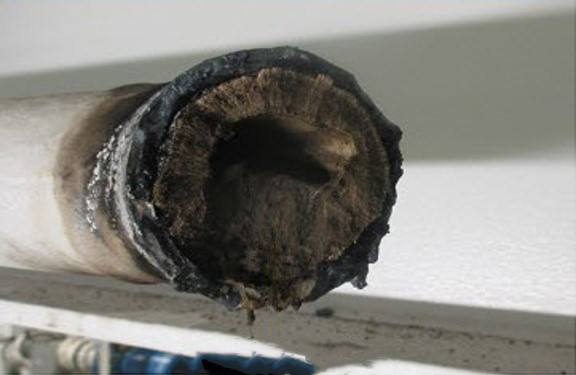 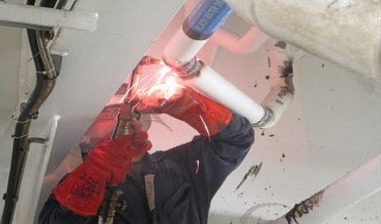 Clogged sewage lines may even require crew members to cut them

In order to avoid above problems, the crew should switch to environmentally friendly alternatives such as probiotic cleaners. Probiotic cleaners are inspired by nature and are free of any harmful chemicals. They contain a combination of bacteria and enzymes which work in tandem to digest the organic waste in the sewage system without any harmful side effects.

The smaller particles—organic wastes, urine, grease, stains—become “food” for bacteria to digest and break down into two basic compounds—carbon dioxide (CO2) and water (H2O). The bacteria grow in number and continue to consume the soils until their food supply diminishes (the soil is gone), then the bacteria population levels off or decreases, and can be washed away during the next cleaning or continue to work against new soils.

For over 30 years, Wilhelmsen has been offering probiotic cleaners in the form of the Gamazyme range. They are well proven in the market and have key advantages such as:

To give your vessel the complete probiotic protection for Blackwater system, Wilhelmsen has launched the Biomax Pack. The pack consists of four probiotic cleaners  which should last for approximately 6 months for a vessel with a crew of 15-20 people. 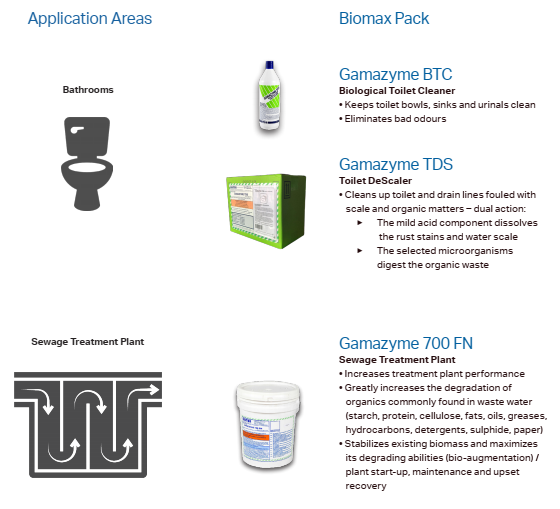 Key Advantages of the Biomax Pack

Please reach out to your local WSS representative to know more about the Biomax Pack and give your vessel the complete probiotic protection for blackwater systems.